On 07.06.14 I decided to go for a walk so I left home,shorty afterwards whilst on the bus the rain started to fall. I had my waterproofs packed in my day pack so I continued on. The rain started to fall even heavier whilst on the train, it was looking pretty glum.
I got off the Metropolitan line at Northwood as the tube was having works on the line all weekend and got the rail replacement bus the rest of the way. Had to wait about 20 minutes for the bus to arrive this seriously ate away into my day.
The bus finally arrived and after a long journey to all stations, Rickmansworth,Chorleywood,Chalfont and Latimer I finally arrived at Amersham station. I at least did get to see more of the area by bus. 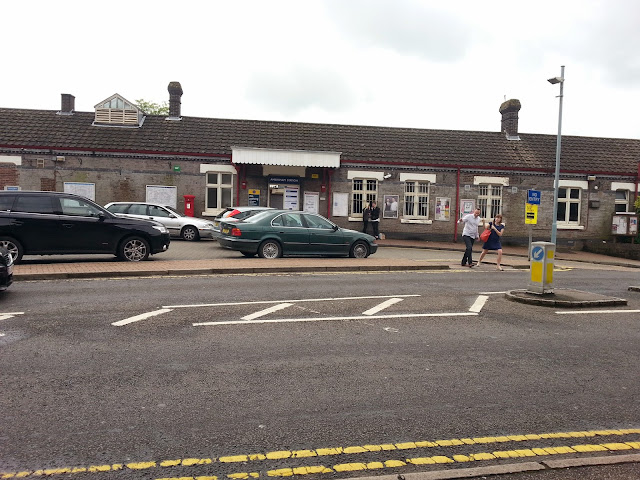 My first impression of Amersham was it wasn't as pretty as Chesham, but then this is the new town. Old Amersham as I was about to see is beautiful. The Rain had stopped at least and the sun was now shining.
After getting my bearings and finding myself on the OS Map (Explorer 172) I set off down the hill and under the railway bridge and into Parsonage wood and up a muddy path to the top of the hill and looked out over the beautiful Chilterns hills. 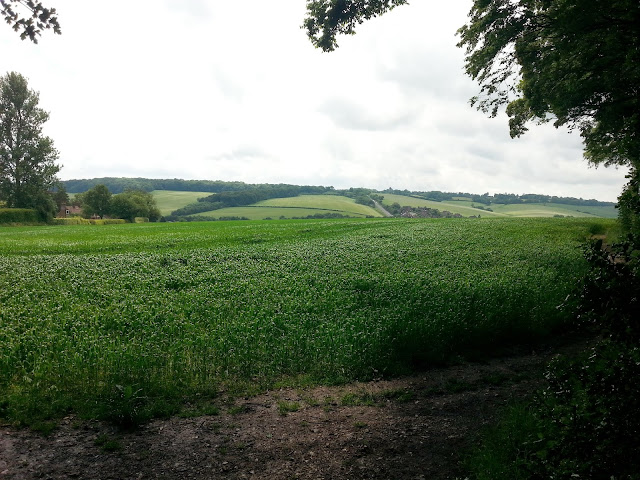 I followed the path now downhill and emerged from the wood onto a path with a breathtaking view down to Old Amersham.
Amersham is a market town within the Chiltern District  in Buckinghamshire, England, 27 miles north west of London, in the Chiltern Hills.
There are two distinct areas: Old Amersham, set in the valley of the River Misbourne, which contains the 13th century parish church of St. Mary's and several old pubs and coaching Inns; and Amersham-on-the-Hill, which grew rapidly around the railway station in the early part of the 20th century.
Television programmes filmed in the town include: 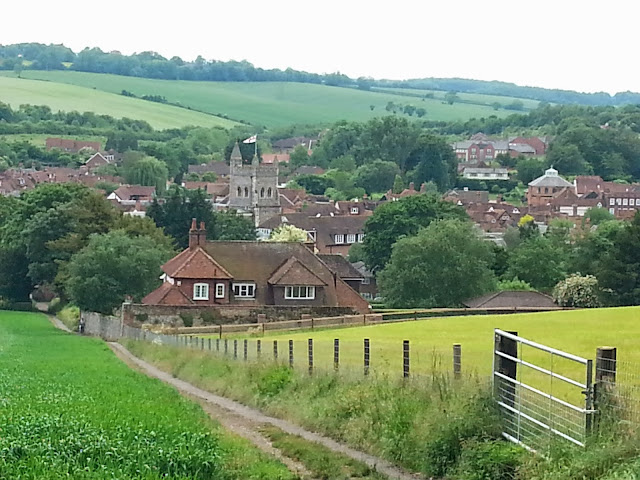 At the bottom of the hill I came out by the cemetery on my left and St Marys Church on my right alongside the bubbling River Misbourne.
St Mary's Old Amersham dates from around 1140 A.D. though the site has been a holy one for much longer, as it stands where Roman Road crosses the little River Misbourne. The missionary monks of St Augustine and indeed earlier evangelist Bishops would baptise their converts at just such a location.

As the town expanded during the middle ages, the church was extended, widened and heightened, much work being done in the C14, when the building came to look much as it does today.

In the early C16, King Henry the 8th sanctioned the persecution of the Lollards, early Protestants, and a number of unrepentant townspeople, now known as the Amersham Martyrs were burned on the hill overlooking the town. 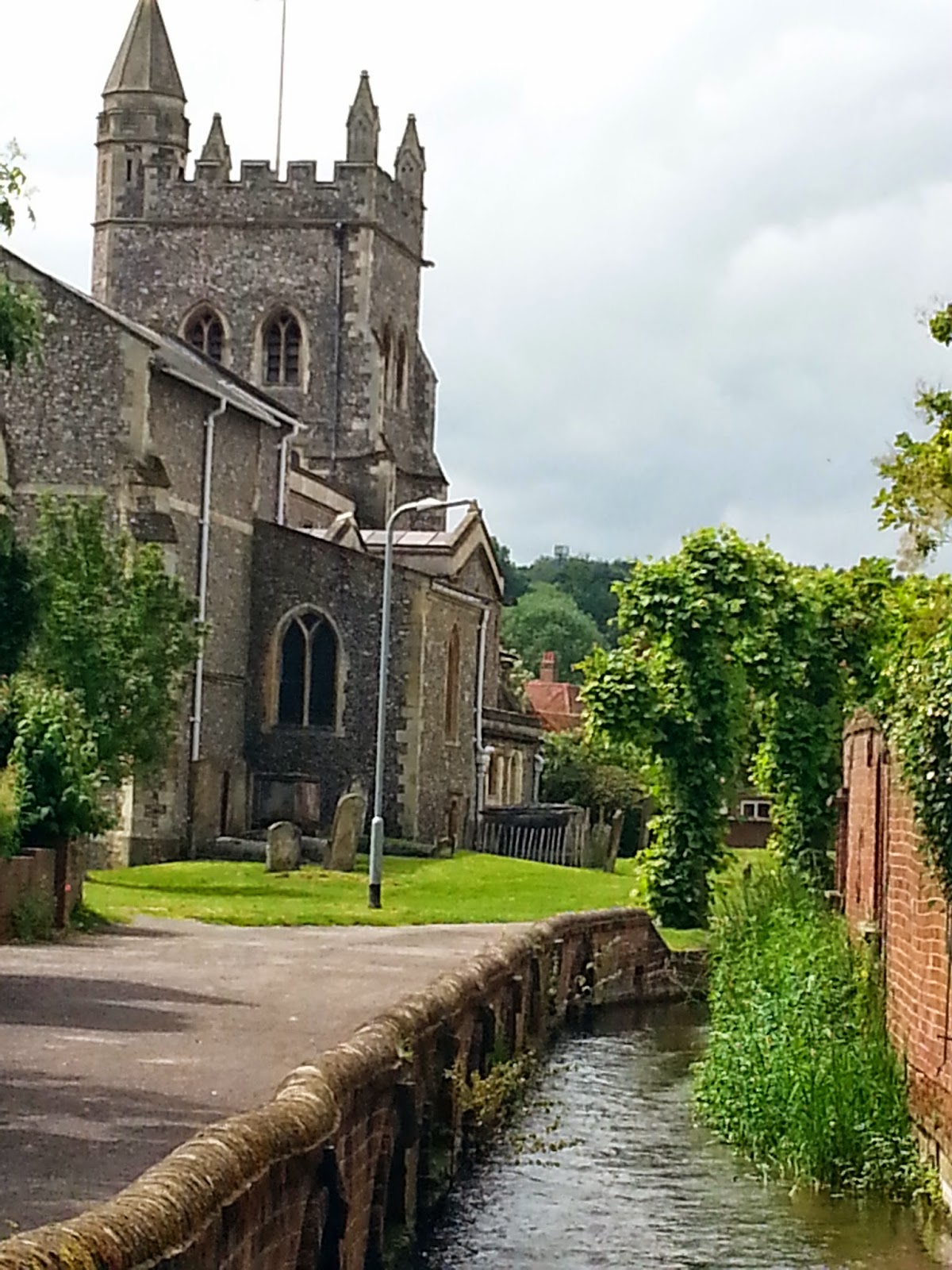 I walk through the church grounds and out on the road and into Old Amersham. This town is just amazing I would love to live here,but I suspect the prices would be a little out of my range. I am now following the South Bucks Way path.

The most prominent object in the High Street is the Market Hall, a two-storied building of brick with stone dressings, the upper story of red and blue bricks being supported on semi-circular arches and surmounted by an octagonal wooden bell-turret and clock. 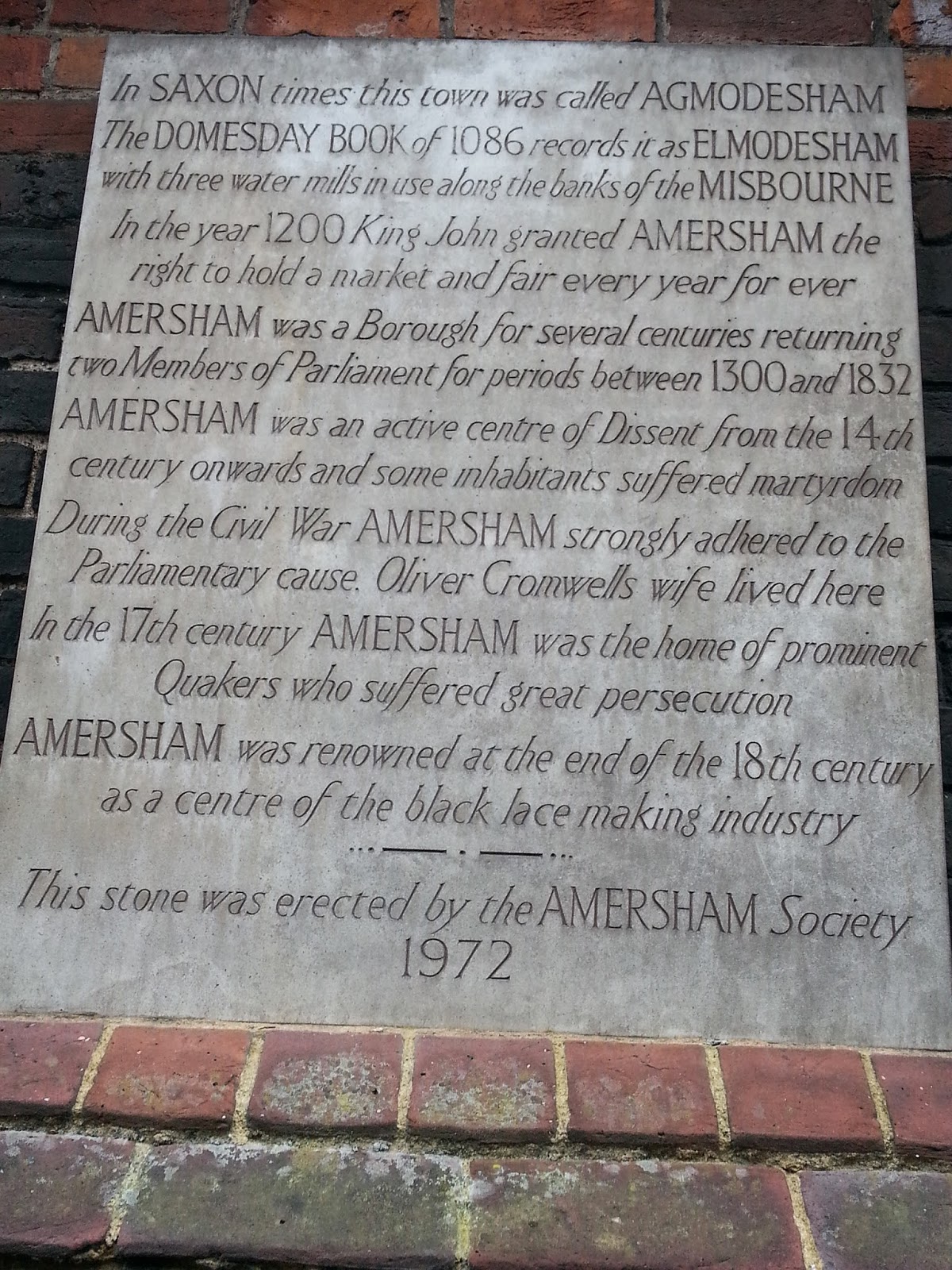 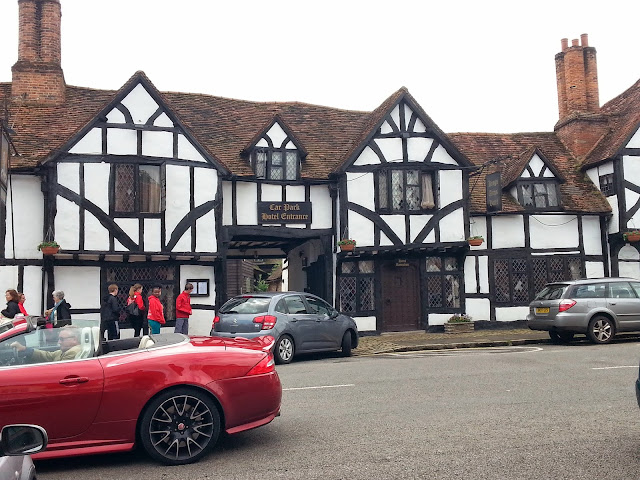 King's Arms Hotel in High Street is a three-storied brick and timber house of the 16th century gabled at the back but with a modern front. The hotel has been used extensively in TV and Film productions including Four Weddings and a Funeral, Miss Marple and the TV series Midsomer Murders. It has also hosted many famous guests such as Oliver Cromwell. 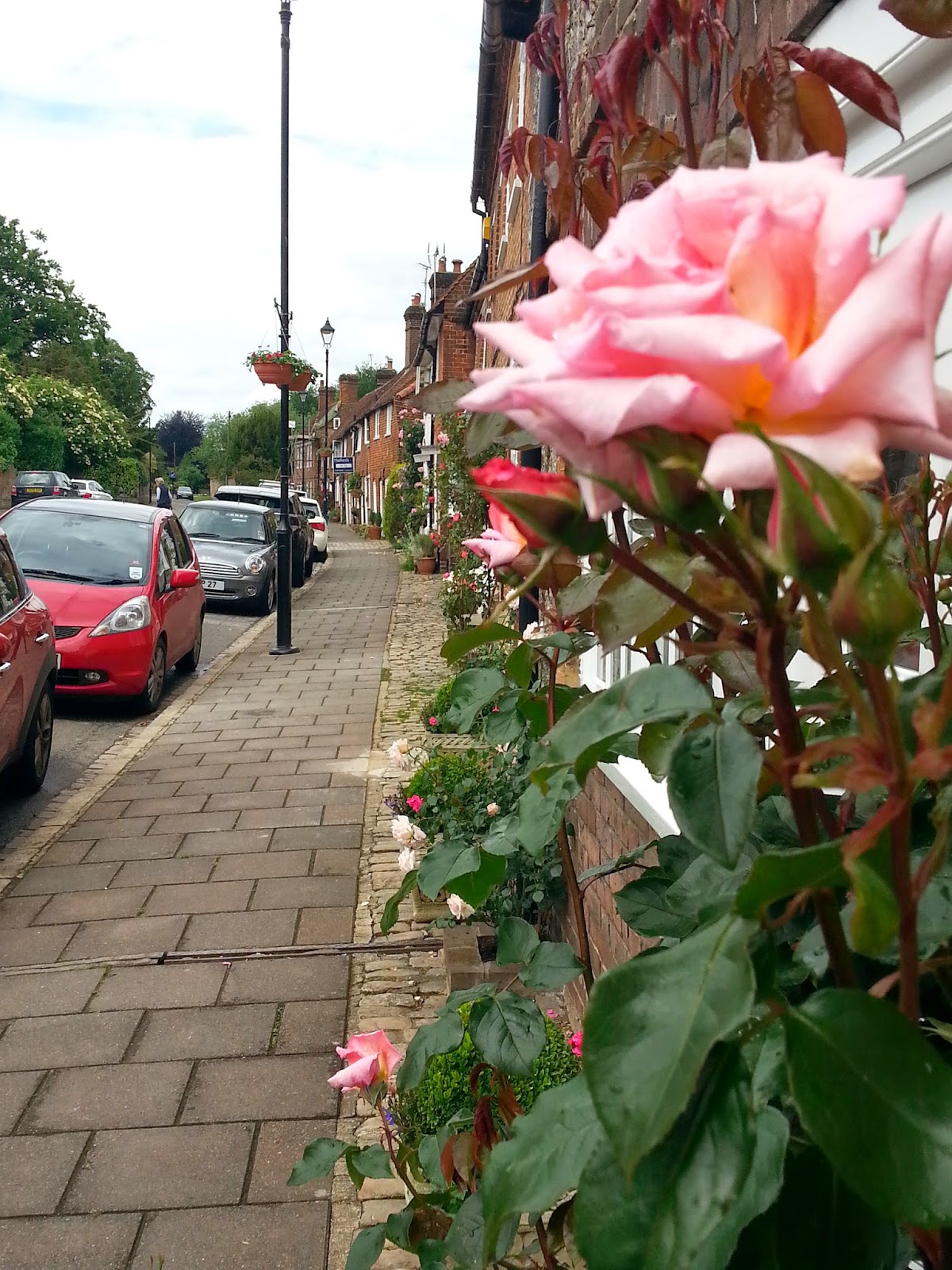 After leaving the town I follow a footpath that eventually takes me down and under the A413 road alongside the River Misbourne. Here I saw my first Red Kite of the day and was to see many more soaring over the high grounds.Obviously a place where the local youth hang out as there was graffiti on the walls of the underpass. The only grotty place of a otherwise immaculate town. In the crystal clear waters I could see shoals of roach and the odd chub,lovely. 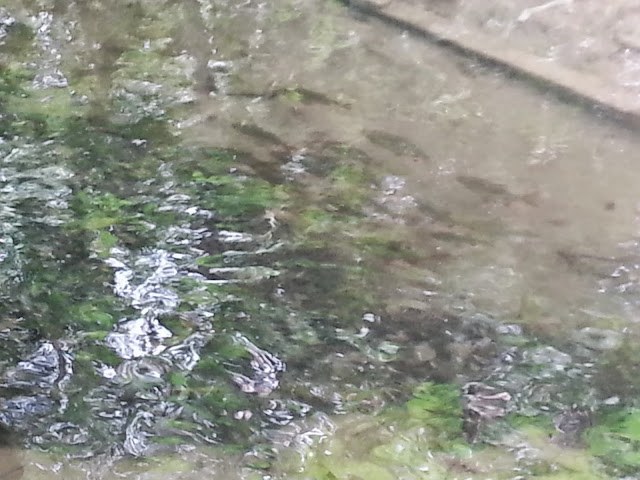 On the other side I exit another wooded area and walk a very short stretch up the road and turn into the Amersham Hills Cricket Club where a match was being played. 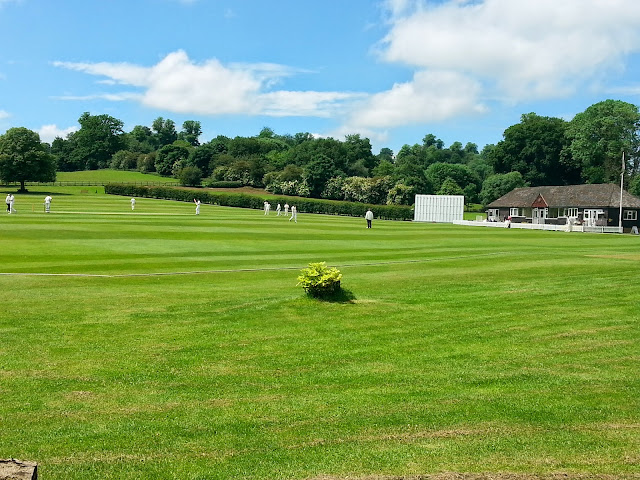 I followed the signs for The South Bucks Way that took me right into the cricket grounds, I thought this doesn't seem right and thought maybe the sign had been tampered with. So I back tracked and took another path up a road and walked as far as Shardoloes Farm where there were numerous signs saying" Private road ,no footpath" so I walked back down the hill. Across to my left I could see the footpath I should have been on had I just followed the sign in the first place. To save a longer walk, I took the risk and jumped a fence to cut across the grounds of the farm. I ran past the house before a angry farmer came running out with his shotgun "Get of my land" and across another fence on the other side. I was now back on the correct path.
I could  hear water gushing down a waterfall from the lake I was now walking alongside. 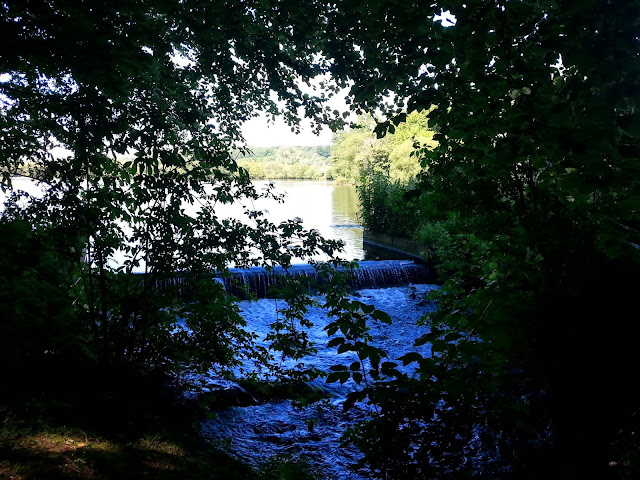 A  little further along the path I could now see the large property that was on top of the original path I took.  Shardoloes is a large 18th century country house. A previous manor house on the site was demolished and the present building constructed between 1758 and 1766 for William Drake, Sr, the Member of Parliament for Amersham.Built in the Palladian style, of stuccoed brick, the mansion is nine bays long by seven bays deep.

Humphry Repton was commissioned to lay out the grounds in the classical English landscape fashion, in the lee of the hill upon which the mansion stands. Repton dammed the River Misbourne to form a lake. 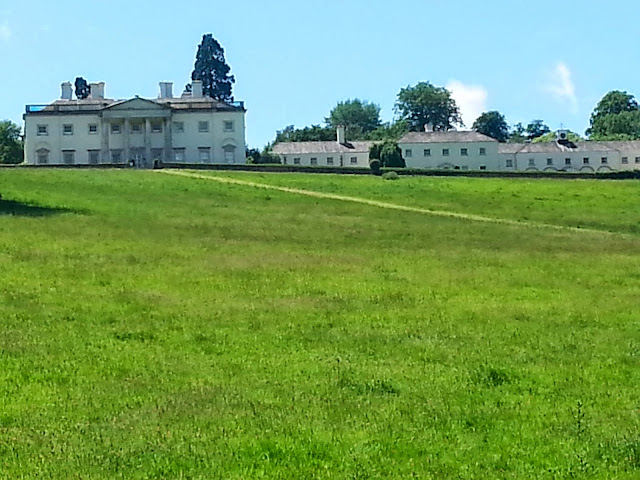 Shardeloes today is a complex of private flats; the principal reception rooms are preserved as common rooms for the residents.
I followed the footpath through some lovely meadows following the River Misbourne again. The Sun was extremely hot today a big contrast to the morning travel into Northwood.I left the meadows and left onto a road where a hundred metres up I could see The Crown Inn. A beautiful sight after a walk on a hot day. I purchased a pint of Bellringer that went down a treat. Bellringer is a notably hoppy ale, light to medium-bodied, clean-tasting, refreshingly dry, with a balancing sweetness. Citrus, pale malt aroma and dry, bitter finish. Consistent. Amber-gold in colour. The same real ale that is supplied to Baths top pubs! 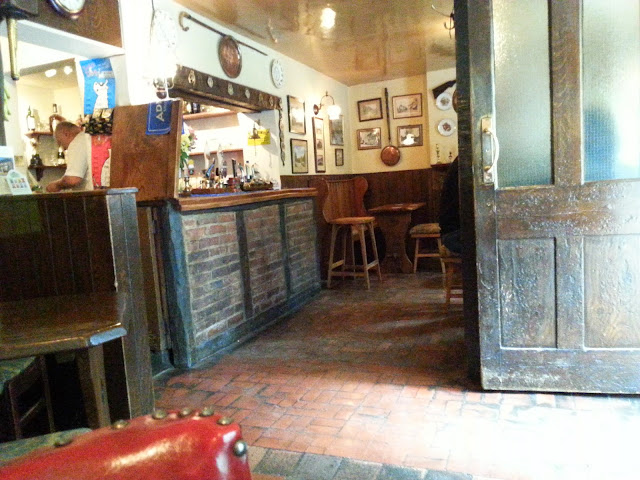 The Crown Inn has been in the same family for over 90 years and Trevor and Carolyn Howhave held the license since 1993. 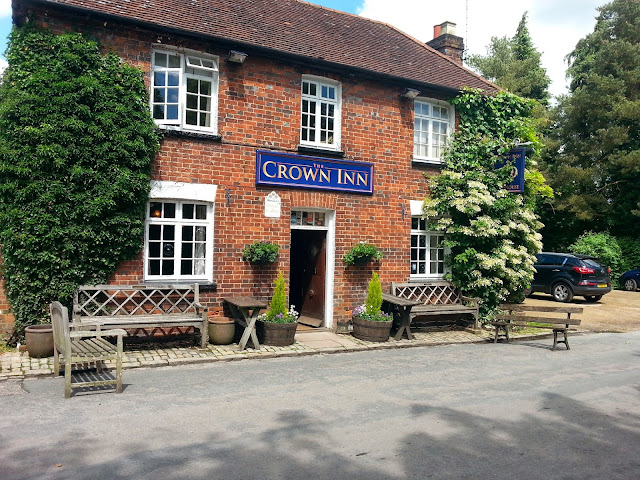 I am now in Little Missenden.
"Missenden" is derived from the Old English for "valley where marsh plants grow". In the Domesday Book of 1086 the two villages are recorded as Missedene and Little Missenden is clearly identifiable by two hides owned between three landlords. One of these hides belonging to the Count of Mortain (around Town Farm) expanded after Domesday to become the manor of Holmer whence the village of Holmer Green was born. Other hamlets which are in the ancient parish of Little Missenden are Beamond End, Mop End, Spurlands End, Little Kingshill, Brays Green and Hyde Heath. 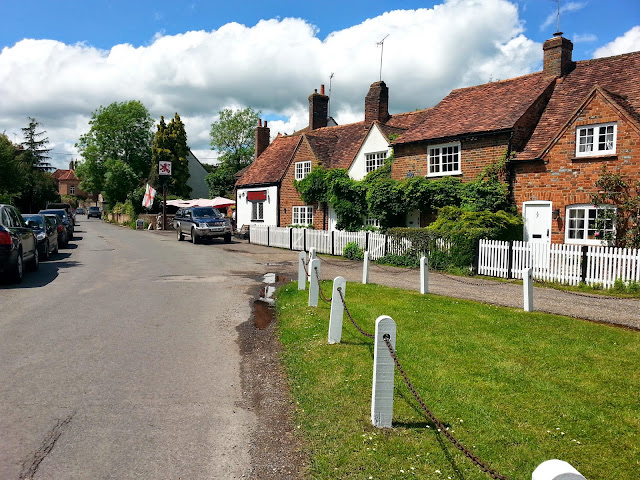 The main London-Aylesbury road used to run through the centre of Little Missenden and past the two pubs – The Red Lion and The Crown. In the early 19th century, a new by-pass road was built to the north and this now forms part of the modern A413 road.
The village has been used in many films and television programmes over the years, particularly as one of the more frequent ITV Midsomer Murders filming locations. "Missenden Murders" was considered as a possible title for the series. The Red Lion pub has appeared in three episodes. Despite being a small village, in recent times it has also hosted acclaimed comedy and arts festivals. 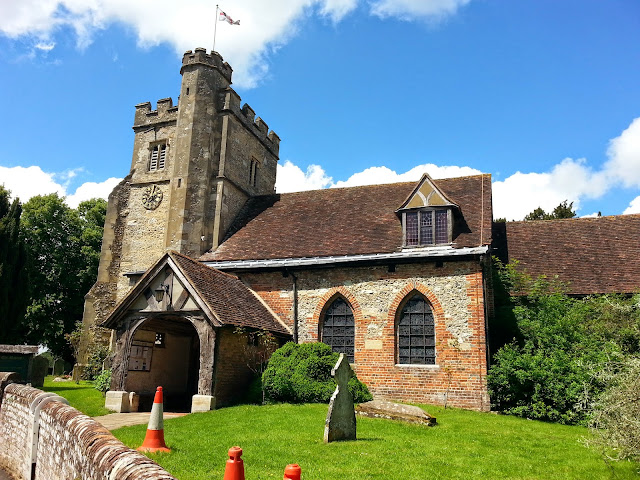 Further up the road I came to the Saxon parish church of St John the Baptist was built next to the River Misbourne. The church was extended in several stages for at least 1000 years, the oldest part being built in circa 975 AD. The chancel dates to the 13th century, the North chapel was added in the 14th century, and the porch the following century. The exterior of the south aisle was rebuilt in brick in the 18th century. Some wall paintings survive inside the church, which were uncovered in 1931. The best preserved of these is a 13th-century depiction of St Christopher with a young Jesus. 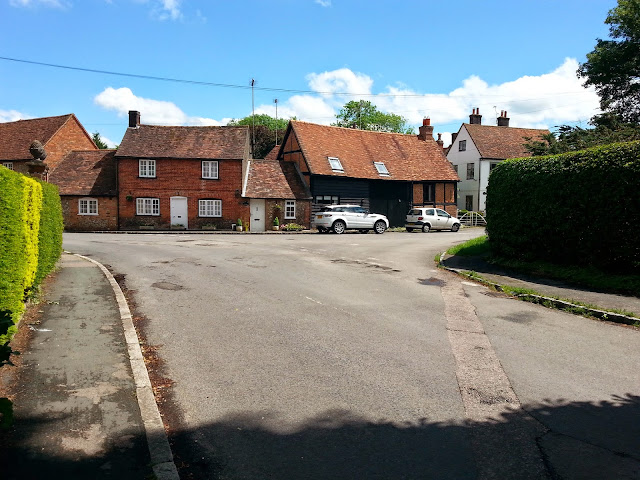 I was hoping to be able to get a bus back to Amersham from here to save some time, but there appeared to be no bus stops I could see so I walked back the way I came along the same route.
The Red Lion has seen many changes since 1649. The Great Fire Of London, The English Civil War and The Glorious Revolution may have been and gone, but "The Red" has remained much the same with traditional value. The Red Lion has seen many monarchs - from George II to Elizabeth II - and recently welcomed HRH Prince Harry when he dropped in with some friends for some simple fare - ham, egg and chips to be precise!
The Red Lion has now been in the same family for the past 28 years with Alan, Marita and Paul providing some great home cooking, easy conversation, light entertainment and a warm bed for the night. It is very quaint with no gadgets or machines, but enjoys live music on Saturday nights and open mic nights on a Tuesday, when the locals step up to the mic with nothing more than an acoustic guitar for protection.

I arrive back at Amersham station for the bus journey back to Northwood and the onward journey home after about a 7 mile walk.